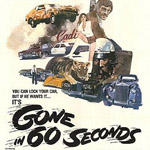 Gone in 60 Seconds was classified as an independent film smash; H. B. Halicki wrote, starred, directed, produced and even did his own stuntwork in the film, which, at the time, was phenomenal. In a contemporary context, however, the portions of the film preceding the chase sequences are seen as typical of a badly acted 1970s movie. Halicki employed family and friends (instead of professional actors) to play parts in his movie to keep the budget low. Therefore, the acting is somewhat substandard when compared to other films of the time. The characters depicted as being members of the emergency services were actual police officers, firemen, or paramedics. The then-mayor of Carson, California, Sak Yamamoto, also appeared as himself.

All of the police cars damaged in the film, as well as the garbage truck that overturns, three fire trucks, two waiting for the cars to clear, and another one stopping to put out a fire, were bought at city auction by Halicki in 1972, for an average price of $200 each. They sat in an empty lot for over a year until production on the movie began in 1973. The fire trucks seen on the Vincent Thomas Bridge during the main chase were real Long Beach FD units on their way to an emergency call. The “crash” staged for the film was blocking both lanes and they could not get past until the cars were cleared. Halicki asked the camera crew to film them in case he found a place and time to fit the shots into the movie.

There was no official script, apart from several pages outlining main dialog sequences. Much of the action/dialog was improvised and ad-libbed by the cast and crew as they went along. This caused many problems for the editor, Warner E. Leighton, who never knew what footage was being dumped on him or where in the movie it belonged. In the DVD audio commentary, he described the script for the construction site scenes of the main pursuit as a piece of cardboard with a circle on it. Halicki pointed at it and said, “That’s the dust bowl. We went around it twice. There’s your script.”

The pursuit is the longest car chase (40 minutes) in movie history and takes Pace through five cities as he attempts to lose police. Nearly every civilian vehicle seen in close proximity to the main chase (especially in downtown Long Beach) was owned by Halicki. This resulted in several of them being seen multiple times in the 40-minute sequence. The second “Eleanor” that Maindrian steals from the car wash, and the white Ford that he and Stanley spend much of their time in, are visible parked in one street that Maindrian turns onto before hitting the boat in Long Beach. The white Ford also shows up in many other shots.