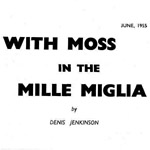 […] On the winding road from Siena to Florence physical strain began to tell on me, for with no steering wheel to give me a feel of what the car was going to do, my body was being continually subjected to terrific centrifugal forces as he car changed direction. The heat, fumes and noise were becoming almost unbearable, but I gave myself renewed energy by looking at Stirling Moss who was sitting beside me, completely relaxed, working away at the steering as if we had only just left Brescia, instead of having been driving for nearly 700 miles under a blazing sun. Had I not known the route I would have happily got out there and then, having enjoyed every mile, but ahead lay some interesting roads over which we had practised hard, and the anticipation of watching Moss really try over these stretches, with the roads closed to other traffic, made me forget all about the physical discomforts. I was reminded a little of the conditions when we approached one corner and some women got up and fled with looks of terror on their faces, for the battered Mercedes-Benz, dirty and oil-stained and making as much noise as a Grand Prix car, with two sweaty, dirty, oil-stained figures behind the windscreen, must have looked terrifying to peaceful peasants, as it entered the corner in a full four-wheel slide. […]