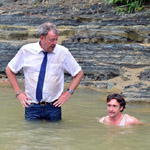 For 13 years I was the script editor on Top Gear.
Here’s another boring story about that.

We weren’t very good with planning on Top Gear. The stuff we put loads of work into often turned out badly. Hence never-loved features like Barn Or Bin or the utter tossfest of Top Gear Stuntman. Whereas the things we didn’t really plan for often became unexpectedly good or turned out to be important. Hence the American road trip that spiralled into something so massive it couldn’t be edited to fit into a normal studio programme, earned a whole show to itself and accidentally invented the annual Top Gear not-Christmas special. […]

[…] I never imagined that some idiotic things daubed down three cars would get an actual reaction. Secretly, I was quite thrilled. Obviously, it’s easy to be thrilled when you’re 1000 miles up-country with your face in a bucket of mojito. Even so, it was quite remarkable. People still think we faked it, which is a shame. I can tell you it wasn’t a set-up. Those were real people who were really angry, all as a result of my stupid slogans idea. I’m only slightly ashamed to admit, it’s one of the proudest moments of my career.

The other day on Twitter I mentioned that I had some stories from my 13 years as script editor on Top Gear, but that they weren’t very interesting. Since a couple of people asked, I’ve written this so you can see what I mean.

There was an unwritten rule on Top Gear that the further away from cars we got, the worse an item was going to be. As a general guide, if you didn’t see a car moving on screen for over two minutes, the film was probably shite. Unfortunately, every so often we completely forgot about this rule. Which is how come we ended up making an idiotic thing in which we took over an art gallery and filled it with motoring themed things. If memory serves, it came about because of some bet Jeremy had made with a mate who ran a real art gallery, but casual bets aren’t necessarily a good basis for actual television programmes. […]

[…] The next morning there was some grand plan which involved Hammond going off to plug our crap art show on local radio, Jeremy driving his rubbish art car to the location and James hanging some more pictures or something. This is where it went a bit wrong. May and I loafed around the hotel with our film crew for ages having an agreeable breakfast and then someone couldn’t find some car keys and someone else had lost their phone there was a general bit of faffing about before finally we headed towards the gallery. We all had a lot to do and everyone else had been busily filming for ages, except us. Jeremy rang me to see how we were getting on and I had to explain that we were still in the back of a crew van, bumbling out of the hotel car park.

The thing about Jeremy is that he likes exaggeration. Also, he’s very good at it. So his reaction was quite hyperbolic. “You’re WHAT?” he boomed. “This is a complete DISASTER.” We’d had quite a few drinks in the hotel bar the night before. I was tired and possibly a bit hung over and not in the mood for overstatement. “It’s not a complete disaster,” I snapped. “If you want a fucking disaster…” At this point the line went dead. In retrospect, this was almost certainly because we were on mobile phones and one of them had dropped the connection. But at the time, I didn’t think of that. I thought Jeremy had hung up on me. And I was very cross about this. How rude, I thought. How bloody sodding rude. […]