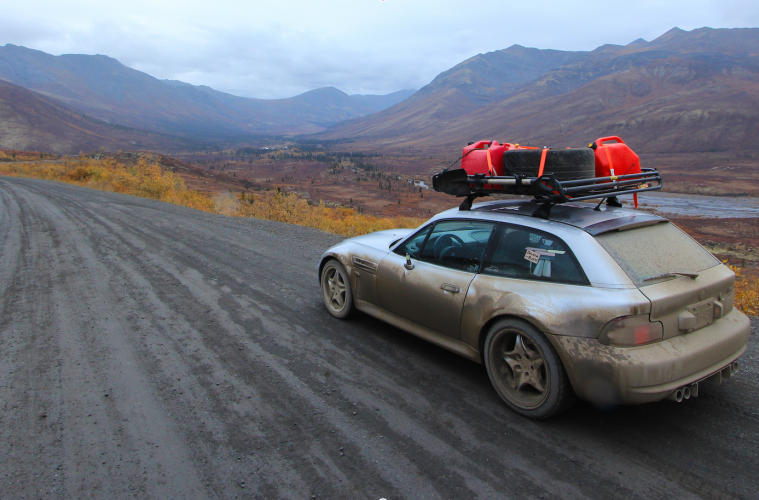 LeesTip: To the End of the Earth in a BMW M Coupe 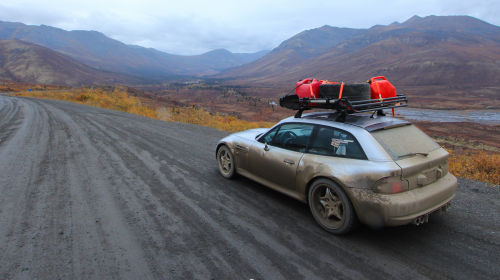 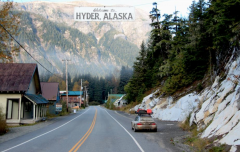 Where to begin? About a year ago, Ryan, knowing my love for road-trips, tossed out his idea about driving the Dempster Highway from the Klondike Highway to Inuvik, NWT. He had planned this a year prior with his father, but they elected to conquer the PCH down to San Diego instead. The Dempster is a highway renowned for its beauty, remoteness and… lack of pavement. As a matter of fact, due to freeze/thaw cycles and its substructure is composed of up to 8 feet of gravel insulating it from the permafrost. So from there, the planning began.

When driving a road like this, being a 1,500km round trip of rock/shale/gravel in mediocre conditions at the best of times, in addition to 5000+kms of highway to get us there and back, you’d elect to travel in a more roomy, comfortable vehicle with creature comforts and a sense of reliability such as my new Jeep Wrangler Rubicon. However, being the gear-heads we are (read idiots), we chose to tackle this trip in Ryan’s 2001 BMW M-Coupe. That’s right, a two-door, two-seater, hatchback, with MMMMMuch more power than the Jeep! Then and there, ‘Inuvik or Bust’ was born.

Fast forward to three weeks ago when, if we were like most people, necessary prep-work, vehicle inspections, pre-trip maintenance, packing and planning would have been taking place. Nope. Vegas sounded like a much better plan and a far better idea than any of those things! So for the 6 days prior to the trip (for Ryan) and 4 days for myself, we drank, ate, gambled, partied and relaxed with good friends in sin city. Returned with empty wallets (damn you Roulette), and a lack of sleep, the night before departure. In about 3 hours, we had the winter wheels and tires bolted up, roof rack mounted, a spare front and rear wheels and tires, 3x 20 liter jerry cans and a 5 ton jack, a roadside emergency kit and a beer cooler packed and ready for mission (im)possible. With anticipation growing, the morning came quickly and we were playing the last little bit of Tetris filling the hatch of his pint-sized automobile. Fuel, coffees and some energy drinks and we were off! […]

No more than 20km up the road the M-Coupe (more specifically Spiff_D’s roof rack) gave a mountain goat some complimentary facial reconstructive surgery. Coming over a hill crest, Ryan points out three mountain goats grazing in the opposing ditch. Punching the brakes, they got spooked and darted diagonally across the highway in our direction of travel. Inching further and further into the shoulder and now partway into the ditch, there was no escaping them. In one swift suicidal leap, the largest goat of the three introduced itself to the roof-rack. Be it the impact of the goat, or how far we were now into the ditch, the German missile of mass destruction drifted out of gravel and to a halt back in the shoulder. With a barrage of explicit words now escaping my mouth, we both hopped out to assess the damage. The goats head bounced off the roof rack into the roof, its chest devoured the driver’s side mirror, as its lifeless body ricocheted off the rear quarter panel and into the ditch. Poor goat some may say… well, screw that suicidal goat. Poor BMW! Of all possible mountain goat vs. BMW outcomes, we were fortunate with the best result. The car, though now looking worse for wear, was still drivable. We forge on.