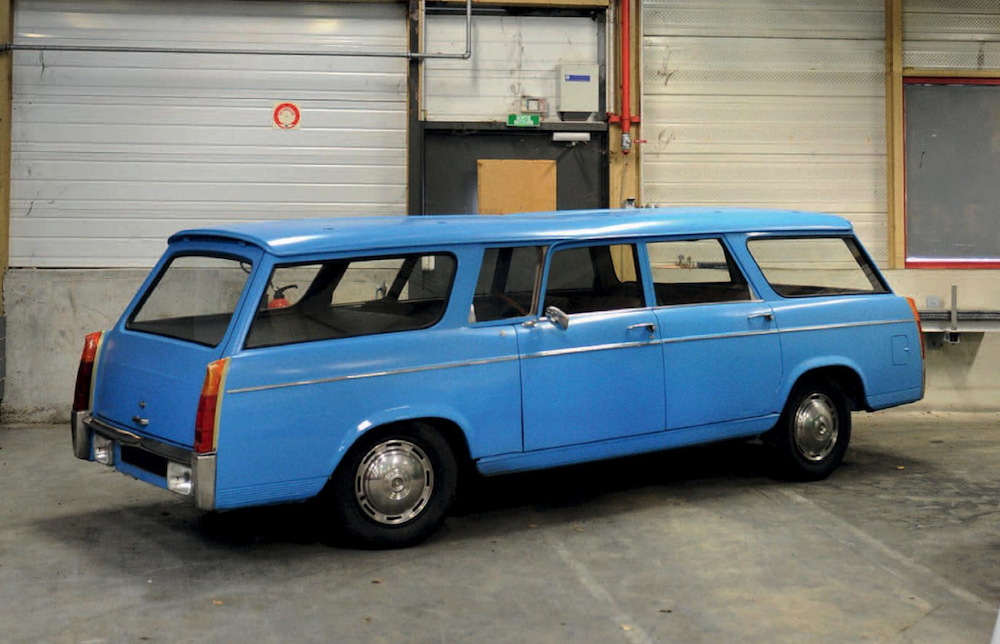 Produced by the Peugeot design office, the cars in Michel Gondry’s film L’Ecume des jours have something surprising about them! Such is the case of this 404 family sedan equipped with a rear in place of its front! With a light brown interior, its look is “stunning”! A unique opportunity to acquire a star car at a low price! 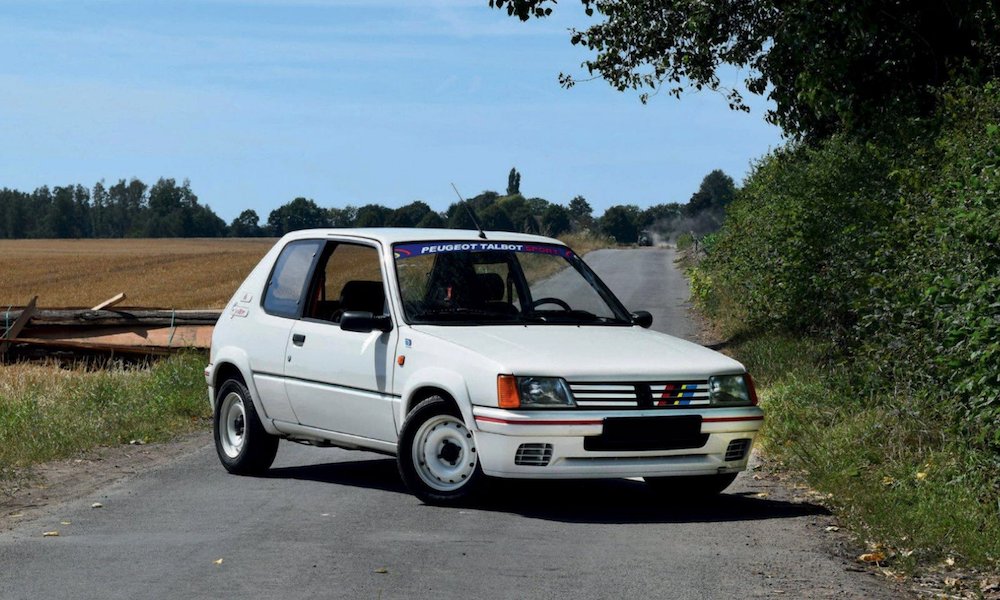 A look to die for, that’s what Peugeot proudly displayed on its advertising at the time when the Sochalian brand was promoting its 205 Rallye. And it’s not only about the face… it must be said that this little 1300 cc engine is full of life and is just waiting to be strongly solicited. That’s the feeling we had when we tried this beautiful specimen. The rpm rises are frank thanks to the 2 Weber dual body carburetors. The 205 Rallye that we present to you was sold new in October 1988 by the Peugeot dealer ADASA in Aviles, Spain. It is presented to us in good general condition, the body has been repainted a few years ago whereas the interior is the original one. The engine works perfectly, the gears are in perfect working order, it’s a real treat. We just noticed a little looseness in the silentblocks that would deserve to be changed. With only 99,200 kilometers on the odometer, this 205 Rallye will make its future owner happy for years to come. 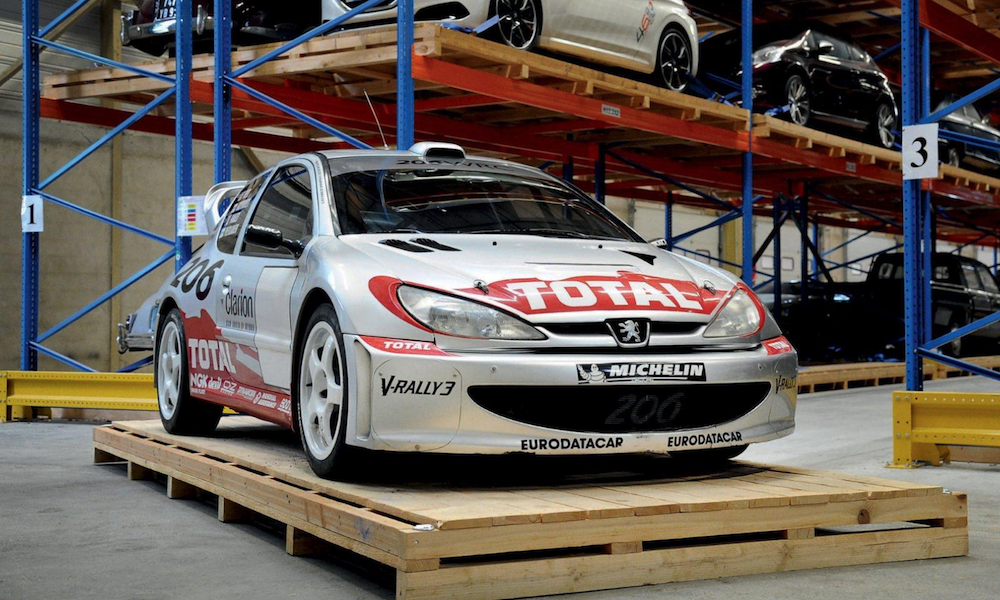 The 206 WRC left the workshops in Vélizy in 1999 and made its competitive debut at the Tour of Corsica, almost 15 years to the day after the 205 turbo 16 made its debut. It is equipped with a 4-cylinder 2-liter turbocharged engine developing 300 bhp, combined with a 6-speed sequential gearbox and all-wheel drive. A worthy heir to its predecessor, it will mark the beginning of the 2000s by claiming 24 WRC victories. Marcus Grönholm will be world champion at its wheel in 2000 and 2002, and Peugeot Sport will win the manufacturer’s title in 2000, 2001 and 2002. It will be replaced in 2004 by the 307 WRC, which will not enjoy the same success. The example we are presenting is a show car equipped with an engine. Made with real parts from Peugeot Sport, it was used by the manufacturer during various events to promote the 206 WRC. With its devastating look it will surely add a touch of sportiness in your garage or showroom 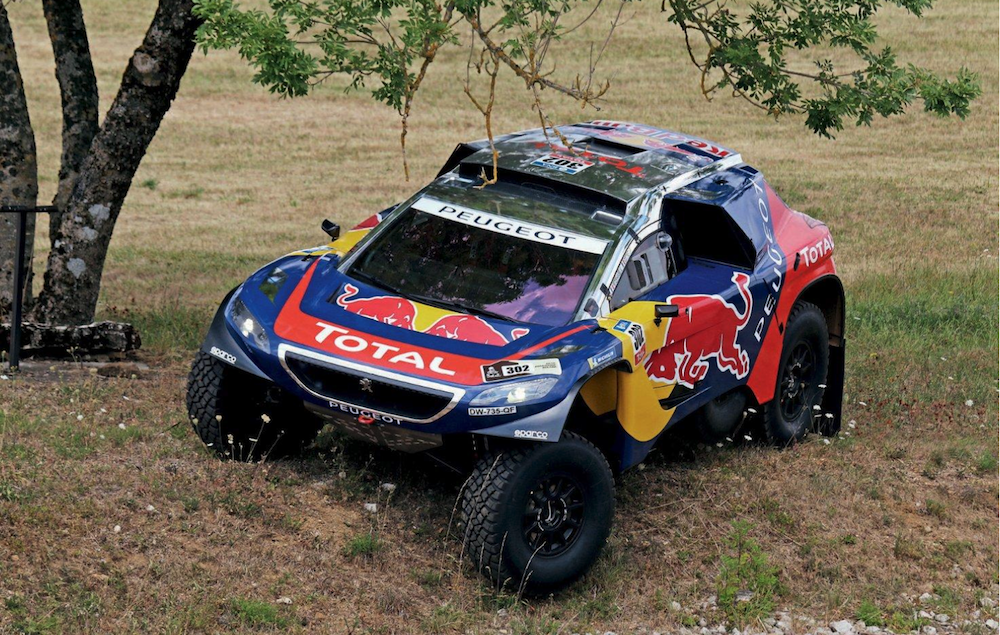 Fifth victory for Peugeot, twelfth for Peterhansel, it is with this success that we must associate the 2008 DKR16 prepared for victory in the workshops of Peugeot Sport. It is indeed at the wheel of this car that Stéphane Peterhansel will finish the Dakar 2016 on the highest step of the podium. The bet was won for Peugeot, which returned to rally-raid in 2015 after 25 years of absence. Apart from the name, the 2008 DKR16 obviously has nothing in common with the standard 2008 Peugeot, not even the windscreen which had been kept on the first 2008 DKR for the 2015 edition. Tall as a man, wider than a Lamborghini Aventador and no longer than a compact sedan, it’s a fierce and intimidating monster. The 2008 DKR16 is also a monster of technology with a cutting-edge design. The tubular truss is made of steel – stronger than aluminum – and all body parts are made of carbon fiber. On each one, a label specifies the weight, to the nearest tenth of a gram! Every detail is thought out according to the constraints of the race and the evolution of the road. Nevertheless, this does not prevent the Peugeot Sport teams from capitalising on proven technologies. Thus, part of the electronics of the Peugeot 908 has been recovered. The Le Mans 24 Hours proto also ran on a turbo diesel engine with piezoelectric injectors. The DKR’s 350 hp V6 Turbo Diesel engine is also very well known, as it is the DT20 originally fitted to the Peugeot 407 coupé, Citroën C5 and C6. The cylinder block, pistons and crankshaft are identical to those of the production engine. The 800 Nm of torque has been shifted to 2-wheel drive using a sequentially controlled 6-speed gearbox. Facing its main rivals Mini and Toyota, Peugeot Sport’s teams had a long way to go to win. But the final victory will go to Peugeot, which will have taken just two years before eclipsing the main competitors, already well established. Property of a reputable car preparer, this 2008 DKR16 is ready to hit the gravel again for the next rally-raid. 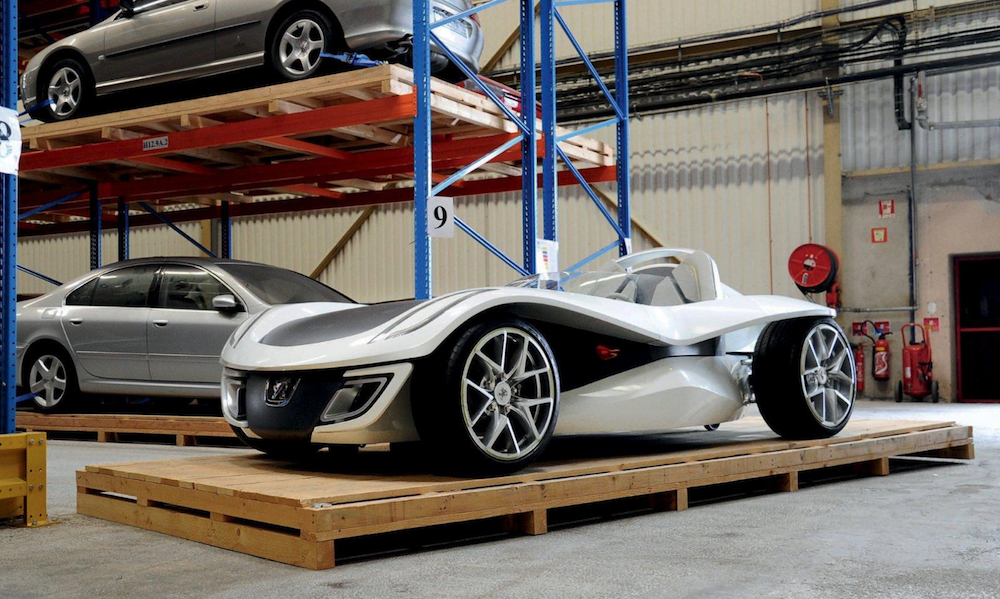 The history of the Peugeot Flux concept car began with the Concours de Design Peugeot in 2007. The theme of this competition is summarized in six letters: P.L.E.A.S.E, meaning Pleasure, Lightness, Efficiency, Accessibility, Simplicity and Ecology. Conceived by student Mihai Panaitescu, 20 years old at the time, his study was presented at the Geneva Motor Show, before the 1/1 scale model was shown at the Frankfurt Motor Show. It then appears in the video game Project Gotham Racing 4 for XBOX 360, a copy of which is installed in front of the passenger seat. The name of this barchetta is inspired by the continuous change in daily life, from work to leisure. The car moves forward thanks to an electric motor and a fuel cell powered by hydrogen. Its body is made of plastic and aluminum and its seats are made of polyurethane. The model we are offering for sale today is the Peugeot Flux concept assembled by Peugeot to be exhibited all around the world. It is not motorized, its construction is superb and allows you to project yourself into the universe in which Peugeot has been engaged for almost 20 years. A concept car essential in its creative approach combining design, driving pleasure and ecology. 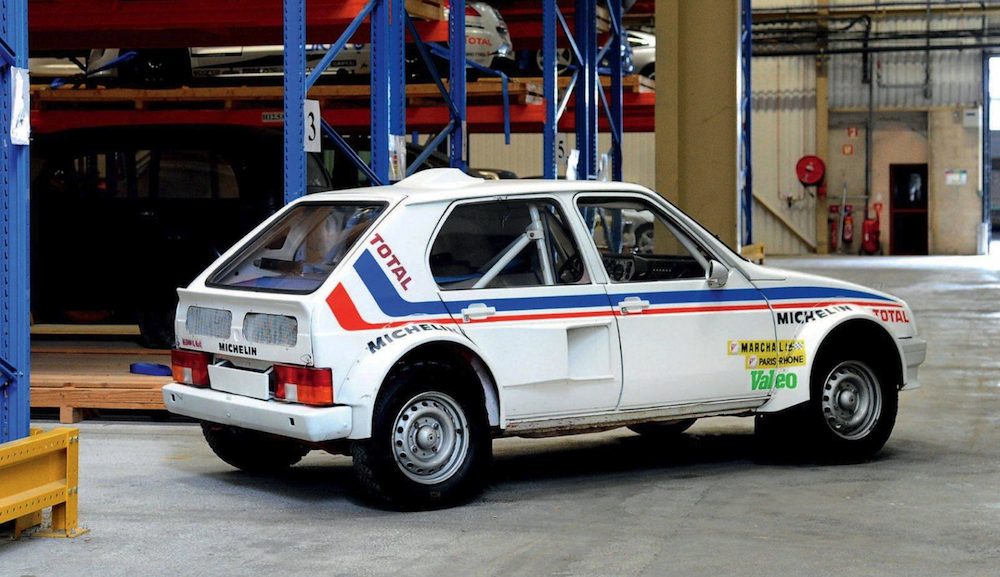 In 1984, it was spectacular, devilishly efficient and relatively simple design for greater reliability. 36 years later, the Citroën Visa Dangel prototype can be displayed in a museum but is also a real racing car with amazing performance. The story begins in 1980, when Guy Verrier joins Citroën Compétition as Sports Manager with the aim of taking part in the World Rally Championship. While the preparation of a prototype usually goes through the design offices, it will be decided to call on different independent team to compete and evaluate the best options on the ground. The boldness of some will lead to several radical transformations such as the rear mid-engine, propulsion or all-wheel drive in a manufacturer that is nevertheless a fan of front-wheel drive. In the reserves of the Peugeot Museum for many years, this unique model made by Dangel in collaboration with Citroën was certainly the most successful of the nine prototypes on offer. In 1983, Danielson, Politecnic, Strakit, but also Mathiot, Odinet, Mokrycki and even the British manufacturer Lotus proposed and tested their version of the Visa. Henry Dangel arrived with his own all-wheel drive system, a 175hp mid-engine PRV V6 with two triple carburetors and a 5-speed gearbox from the 604 range to better handle the torque. The feedback is very positive, especially as the quality of the whole package is perfectly in line with Citroën’s expectations with a contained weight of only 800 kilos. Unfortunately, the year 1984 is approaching and the Visa is already six years old when the young BX is only two. The choice of the manufacturer will go for the BX for obvious strategic and commercial reasons. Put back on the road last June by the Aventure Peugeot, this unique model is a real race car, as much in its conception as in its performances. Symbol of a time when a talented independent mechanics could develop a potential world champion to shine the name of a manufacturer, it is a unique model in the world to be rediscovered!

This Peugeot 304 is an S version, equipped with the 4-cylinder petrol engine of 1300 cc developing 74 hp. With its specific equipment such as headrests and “20-hole” rims, this 304 S cabriolet works well but would deserve a partial restoration to erase small defects and traces of old restoration. The original interior is in good condition and the soft top is new. 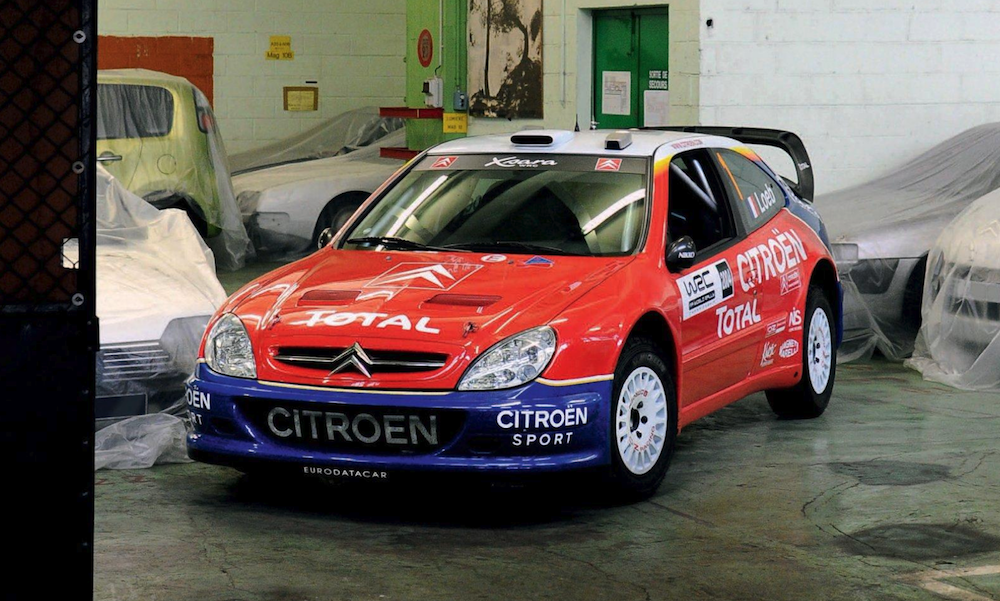 The Xsara WRC, which appeared in 2001 on World Championship stages, is one of the most iconic rally cars in history. Powered by a 2-liter turbocharged 4-cylinder engine, combined with a 6-speed gearbox and fourwheel drive, it is a car that develops more than 310 horsepower. In the hands of Sebastien Loeb, Carlos Sainz, Colin McRae or Petter Sollberg, the car performed well as soon as it hit the road. Its first victory came at the 2001 Tour de Corse. 31 other successes will follow, including 28 with Sebastien Loeb and Daniel Elena. The legendary duo will win 3 World Championship titles in 2004, 2005 and 2006 and Citroën Racing 3 constructor titles in 2003, 2004 and 2005. The car we are presenting is a show car equipped with an engine. It was used by Citroën at trade shows and various events to promote their Xsara WRC. Built with real parts coming from Citroën Racing, it is an original vehicle, and an ideal eye-catcher for your showroom or garage!

The car we present was sold new by the Peugeot dealer in Delémont, Switzerland on March 18, 1999. Credited with only 68,500 km, this 406 V6 coupe is in a very good state of preservation. It comes with all of its original books as well as its purchase invoice. 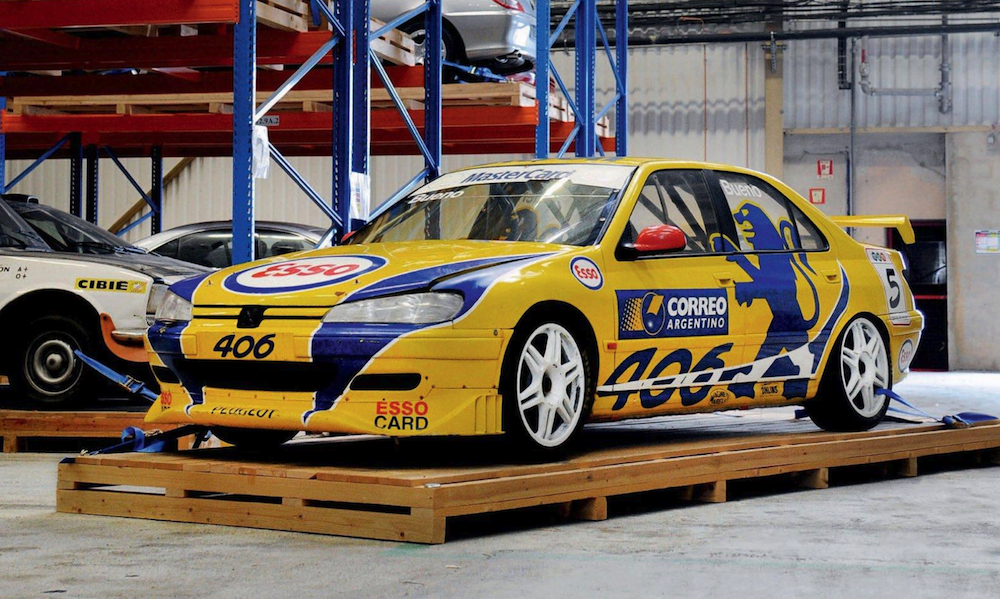 During the 90s, car racing was still a popular way for manufacturers to promote their new products. As soon as the 406 came out, Peugeot decided to enter the German Supertourism, the most competitive championship of the moment. Financed by Esso and built by Peugeot Sport, the 406 had more than 300 hp, weighed less than 1,000 kg. Ready for the 1996 season, they took third place in their first participation before crushing the competition in 1997. The 406s were also entered in the BTCC and the Belgian Touring Championship, before being exported to South America and France, where they all proved to be competitive. The example we present today is the ST31 chassis, which won the title in the South American Supertourism Championship, otherwise called the Cup of Nations, in 1999 in the hands of Brazilian driver Cacá Bueno. It still sports its 1999 colors, with period-correct sponsors and signature yellow-and-blue paint job. The engine, the gearbox and the brake calipers are missing. Here is a unique opportunity to acquire a factory car.